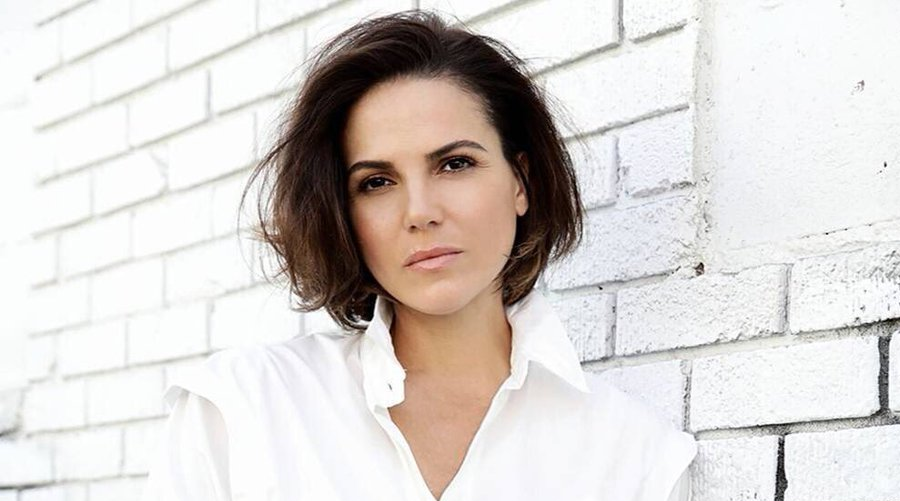 June 29th and 30th The Happy Ending Convention organized by our partner People Convention took place in Paris. 8 actors of the show Once Upon a Time were there. Lana Parrilla aka Regina/The Evil Queen came back for the 3rd time and we were lucky enough to ask her some questions. Here is the exclusive interview with her.

Hi, thank you for taking the time. Last month you tweeted about the new Mike Kelley’s show What/If… You worked with him on Swingtown in 2008. Can you talk about your experience on this great show and your character Trina?
Oh I love Mike Kelley. He is one of my dearest friend. Working with him has been so delightful. He is a true writer, a true artist and he really understands character development and character arc. He really knows how to tell stories. Swingtown was a very personal experience for him. He grew up in that world with parents in that world. So it was really a direct experience for him. He is one of my favorite producers, writers I ever worked with and still remains today one of my bestest friends.

Then 3 years later, Once Upon a Time… Once Upon a Time gave you the opportunity to play several characters : Regina, The Evil Queen, Roni, Ursula… Was it difficult to follow or was it a blast?
You know, it was difficult to follow at times. It took a lot of times and remarks to understand where we were at every given point because of the timeline, the flashbacks. You know, we had to work with someone who is in charge of figuring out where we were on the timeline. As far as character goes that was challenging too because I would have to think « Okay we are on a flashback, where on the flashback are we, what time in Regina’s life, is she the Evil Queen? Is she full on the Evil Queen? Is she becoming the Evil Queen? Is she young Regina? » You know ? And in the Fairy Tale World we saw her evolution becoming the Evil Queen but in the present time Storybrooke, this mayor … it’s very challenging but that’s also what was fun about it. There was a little bit of a puzzle try to figure out where all these pieces fit. And I loved being evil, to play so many different versions of my character. I think it was a real gift and blessing as an actor to be able to have that experience on television.

Regina is a very strong and complex female character, was it hard after 7 years to let her go?
Yes. It still very difficult. I’m still learning how to release her.

You said several times that directing was something you wanted to explore more, you did direct one episode in season 7 of Once Upon a Time and it was great.
Thank you. (She smiles.)
What kind of project would you want to direct? Show, movie, documentary?
I think it would be very good to do a movie. So I just haven’t quite figured out what that is yet but coming off of a show for 7 years, working as hard as I did on that show I needed some time. So I’ve been taking some time for myself but I would love to direct again, I really would and it is just about finding the right script, the right project to do.

You are involved in several causes like lgbtq+ rights, ecology, education, immigration … Do you feel the responsibility as a celebrity to be involved and to use your voice?
I think if it is authentic for an actor you know, to care and want to help and to use their platform then yes I think it is their responsibility. Some people don’t like to get involved and I respect that as well but I, for example, feel that it is my responsibility and I have an opportunity because there are so many people listening to what I have to say and you know, look to me for some advice etc … I feel like it is my responsibility. But I also don’t think I should get involved in EVERYTHING. It has to be authentic, like you know, an organic for me to want to be involved. I have to be passionate about something, I have to care about whatever it is. Found people to get involved to check the box and say « okay I did something » but it’s more effective when you care about whatever cause it is.

Talking about inspirations … You inspire a lot of fans everyday, who were your inspirations figures growing up? Are they the same today ?
Uhm yes and no. I feel like a lot of people who inspired me aren’t famous, and there are some that are. But it changes all the time. I’m always interested in, inspired by, even some really young people. To see their work and what they’re doing and how they use their platform… Like even Miley Cyrus who just is so … I love her. I just think she is amazing. Because she is so authentic and she has this voice and she is always standing behind women’s rights. And yet she is just so free you know. I just love her. And there’s Michele Obama whom I just analyze and look up to. There are these women and there are some men who are doing an incredible work. But is changes. There is always a new face, a new cause and we are always evolving politically so…

In addition of your engagements last year you took the time to shoot David Ayer’s movie with Shia Leboeuf : The Tax Collector. Very few promotion has been made outside some pictures from the actors on Social Media. If you are allowed to talk about it, can you share this experience with us ?
I can’t really talk about the movie itself but I know that they are planning on releasing it, I’ve heard, by the end of the year. So… But it’s not really my … I have no say on what happens with that movie. It’s not on my hands. (She laughs)

You have been seen on set of Deputy, a new Fox show that David Ayer produces …
I wasn’t on set.
A picture started some rumors …
I know. I just happened to be in town and I went to visit, to say « Hi » because I’m still friends with them. So everyone thought I was on it but no. I was at the dinner because I was in town, visiting friends.