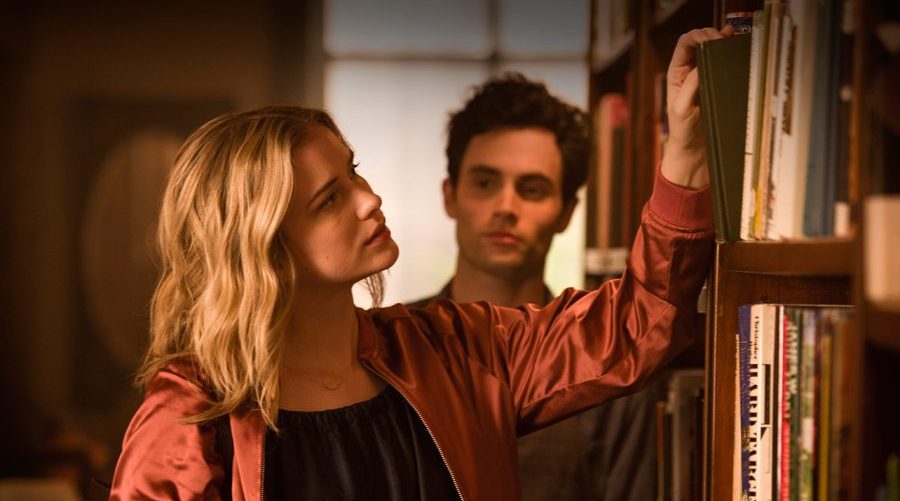 The TV show YOU, launched on Netflix on December 26th, 2018, was an immediate success. Joe (Penn Badgley) is a real catch: librarian, sweet, thoughtful. But there are some shady sides to his personality and Beck will discover those the hard way. Elizabeth Lail who brilliantly interprets Beck in this first season of YOU was kind enough to answer our questions. So if you want to know more, keep reading but we warn you, this interview contents some SPOILERS!

We discovered you in Once Upon a Time, in the Frozen arc of the 4th season. You played Anna, Elsa’s sister. What good memories do you keep from this show?
It was all so magical. It was my first job so I felt as if I had died and gone to heaven. I treasure the people I met the most.

Once Upon a Time creators Adam and Eddie called you after that to interpret Amy Hughes in Dead of Summer. You were able to play with Elizabeth Mitchell again… Can you talk to us about that part?
I absolutely love Elizabeth Mitchell. I jumped at the chance to work with her again, and of course Adam and Eddie. I had such a magical time on Once Upon a Time that I knew these were people I wanted to continue to work with. I am so grateful they saw something in me.

Then 2 years later… YOU. How did you get involved in the show and what made you want to participate?
I auditioned for it like anything else. As I got closer and closer to being cast I felt as if the role of Beck really fit me, and my chemistry with Penn (Badgley ndlr) was real. I had also wanted to work with the creators for a long time, and loved that half of them were women.

Y0U, is based on a book. Did you read it?
I read the book between auditions. Good thing I did, because I didn’t really realize what I was getting myself into until I had finished the book.

The show is full of twists, there are different points of views… Was it hard to follow the state of mind of your character, how did this impact your interpretation?
What was hard is that Beck doesn’t really know who she is, she’s a bit lost. So she behaves differently depending on who she is around. I was digging around for her truth while at the same time remembering her tendency to use coping mechanisms.

Beck is a complex character, emotionally. Was it a psychological challenge to interpret her? Did the part take you out of your confort zone?
Playing her makes you feel like you are constantly in a state of struggle. It’s as if she is carrying the weight of the world on her shoulders, even when she’s with her supposed « friends. » It comes to a climax at the end of the show.

Which scene was the most difficult for you to shoot?
Those final scenes in the cage were the most phgchologically difficult. It’s hard to wrap your head around what the reality of that would feel like, and once you do it’s like you’re trying to breathe under water. I was always worried I would lose my voice, and stress out my body. So I had to take extra good care of myself those weeks.

Which scene did you enjoy the most?
I enjoyed a lot of the scenes between Beck and Joe when they were happy. Having breakfast or dancing. They were nice little respites from the struggle.

Beck is a book lover, what’s your favorite book?
I love to read. One of my favorites is The Alchemist by Paulo Coelho.

The genius of the show is to put the spectator as a voyeur and a stalker. Do you think we all have this dark part inside of us?
I’ve always thought that all humans are capable of both incredible good and severe evil. Our energy seems, to me, to be made up of all the same stuff. So unfortunately I’d have to say yes, we probably all have a so called dark side.

The biggest asset of Joe to stalk Beck is social media. What do you think of that? Did your use of Social Media change after the show?
It’s pretty scary how easy it would be for someone to find out where you live. It also reminded me that people make a lot of assumptions from social media, that are more often than not not true. Joe makes a lot of assumptions about Beck and places her on this impossible pedal stool. I think it serves as a good reminder to not get ahead of yourself before you actually meet someone in person.

The show is really careful in not putting the blame on Beck. She is a victim and doesn’t deserve what’s happening to her. Is it an important aspect of the show for you?
Absolutely. A lot of people are frustrated with Beck because of her choices, but ultimately her lack of curtains is not the problem. The problem is this man violating her privacy, stalking her, and killing what he deems unfit to be in her life.

Did you know your character would die from the beginning ? Can we expect some apparitions in season 2?
I did know. I was shocked though when I first read it in the book.

If you could choose anything in the industry (direct, write, play) what would you want to do?
I would love to keep acting as of now. I hope throughout my career I may be inspired to direct or write. There are definitely stories inside of me. So I suppose we will see what happens.

You can find our review of season 1 here and the french version of the interview here.