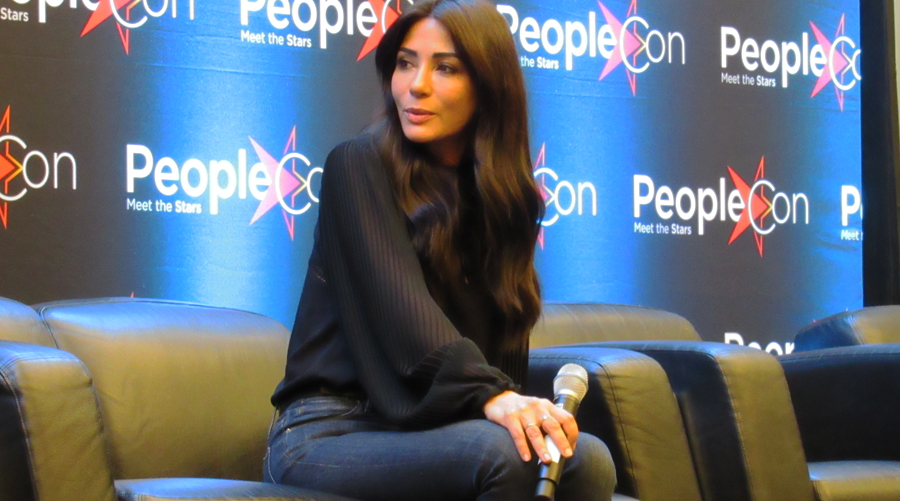 We had the pleasure of meeting with Marisol Nichols who plays Hermione Lodge in The CW’s Riverdale during People Convention‘s #RiverCon2 last year, in Paris. We talked with her about her part in Riverdale but also her experience in 24.

Before being casted for Riverdale, you were known for your role of Nadia Yassir in 24. Is it completely different to work in a show like  Riverdale compared to 24? How different is it?
Yeah, a 100%. I mean, 24 was about as grounded and real as it gets, just kind of based on a format of the show, everything was supposed to be in real time, the stakes were you know, “we’re all gonna die” and it was an existing show, extremely well done, especially for its time. Riverdale is more… well, definitely not grounded, more fantasy, more larger than life, based on comic books so that lends itself to that storyline. It’s also a drama but just sort of a different tone, I would say, than 24.

The Lodge’s family has a special place in the show with Hiram being very « mafiosi » in a way ; do you feel it’s important to have a strong character like Hermione who stands up against her husband in a show like Riverdale watched mainly by teenagers?
Yeah. I keep begging them to make Hermione stronger and stronger and to stop being his shadow, it kills me. So I want to see, you know, a reluctant Hermione take over the mafia business and be the mafia boss as a female.

Hermione had a lot of different faces during the whole three seasons, could you tell which Hermione is the real one?
I wish I knew! I l mean, I would like to say the first season Hermione of like the first 10 episodes. She was free from Hiram, and trying to start over her life. I think that’s always going to be the real Hermione but because of Hiram, she has to do what she has to do to survive. She’s a survivor and unfortunately that means making really bad decisions and doing a lot of things she normally wouldn’t do to protect her and to protect Veronica.

What do you think will be Hermione’s priority in season 4? Her career as Riverdale’s mayor, being a good mother for Veronica or being completely emancipated from her husband?
I think the mayor’s thing is gone, she’s in jail so it won’t do it. I think it will be, I’m hoping it will be taking out Hiram, kind of once it for all and grabbing some power for herself but I honestly don’t know.

There is a very good episode in season 3 in which the young cast plays your characters from the Midnight Club in the past, how did you all prepare for this? Did you give some advice to Camila Mendes to play young Hermione?
I did not. My father passed away last year so while they were shooting this I was in a hospital in Chicago so I did nothing to give her any advice but I talked to her once when she checked in to see how I was doing and I asked if she needed anything and she said “no I’m good” so I told her “go, go have fun then”.

You are an active member of Criminon which is an international program for rehabilitating prisoners but also a spokeswoman for the Citizens Commission on Human Rights, do you think it’s important to use your influence as an actress for these kind of good causes?
Yeah, I mean, I haven’t done that for a while. I do have my own non profit called “Foundation for a Slavery Free World » and I mainly focus on human rights and human trafficking. I’ve done and produced many events in DC with all kinds of executives and congressmen and senators etc. It’s my passion and because of Riverdale it opens the doors to even more just for me to take that sort of enthusiasm for the show and turn it into something that I feel desperately desperately needs to stop.

You were here last year at #RiverCon in Paris. Can you tell us your favorite thing in France?
Shopping. Which Jeff can attests to, I haven’t stopped for two days and I have to put it in my suitcase. Probably the shopping and the sweets. I mean, good God they’re so good… so good!

Do you have any future project you can tell us about?
I do. I’m producing a show under Greg Berlanti who is the producer of Riverdale, he’s also like the number one producer in the world and I have a show that I helped create and sold under Greg B and we’re pitching and we’ll see what happens so hopefully by next year we’ll be able to talk about that as well.